Here's my resumé and some favorite projects:

A realtime network topology & health graph for distributed applications. I was the lead developer on the front end visualization. I worked closely with our Product Managers, Designer and multiple brilliant teams of Developers, developing initial prototypes, rapidly iterating, polishing, optimizing, finalizing features, APIs & interfaces, integrating and ultimately deploying. This was an especially fun and challenging visualization to nail down. Some key challenges: 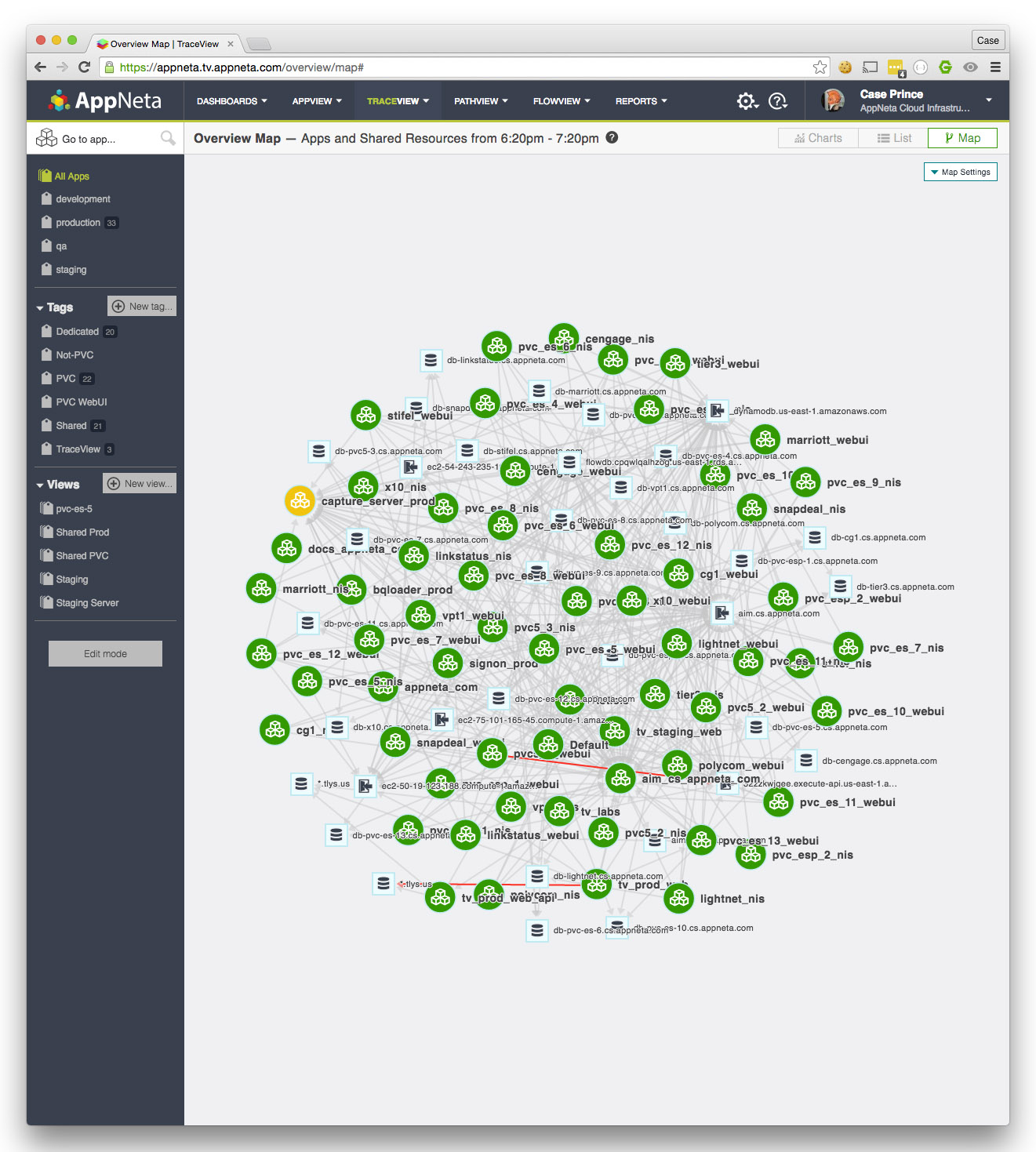 The AppMap needed to be able to visualize anywhere 10 or 1000 networked nodes and still be performant. We chose D3 & SVG for the main visualization. This allowed us to abstract out styling via CSS, and leverage native DOM interactions. These benefits, along with D3's data-binding and SVG's DOM testability made it the clear choice over <canvas> & WebGL.

With hundreds of nodes and network paths we needed to minimize on-screen text for smooth scrolling and digestibility. We used intuitive colors and CSS animation to indicate node health, and color and line thickness to represent network health and throughput. Contextual z-sorting of SVG elements enables users to quickly see (and easily click on) problematic nodes or edges. 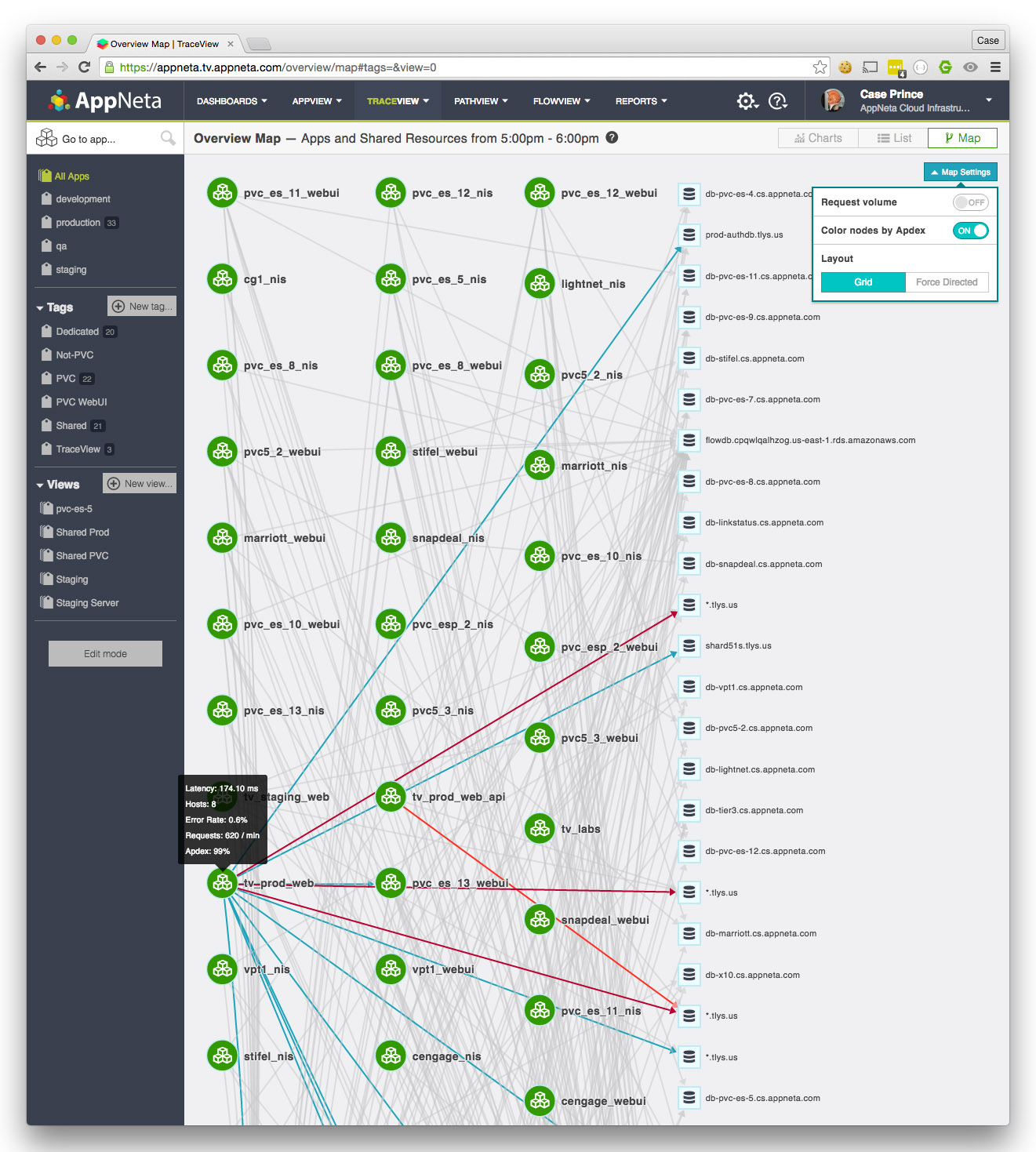 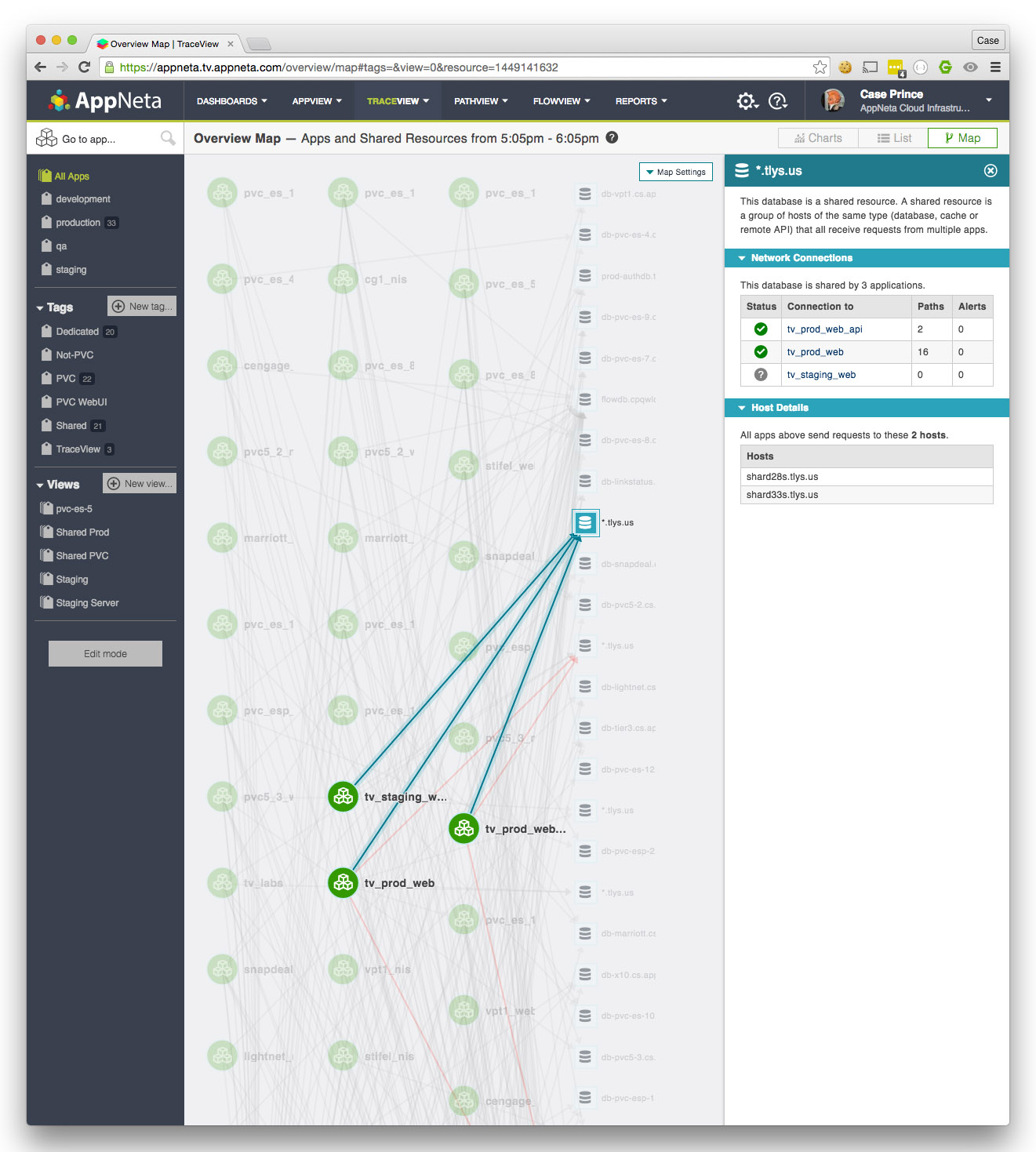 The earliest appmap prototypes used D3's force-directed layout, but with 500+ nodes our frame rate went down and our fans turned on. We dubbed the resulting tangles "angry spiders" and came to understand that force-direction is great for relatively simple maps, but isn't very scalable, especially with persistent text labels.

Our intreped designer Quintin Marcus mocked up a 'column mode', intellegently grouping nodes by type, such that requests generally flow left-to-right, e.g. user nodes on the far left originate requests which flow to the right through servers, to caches, DBs, CDNs, etc. This layout mode was super fun and deceptively challenging to implement with smooth scrolling and dynamic responsiveness.

Notable features at launch include:

We erred on the side of over-delivering by flushing out both modes and persisting user preference for one or the other.

Ye olde Trace Details Visualizer was plagued by long-standing bugs and lackluster UI/UX. Customers were complaining about poor performance and even browser crashes when rendering complex traces. Sadly, we didn't have the time or budget to address these issues, and the legacy code had become unmaintainable. 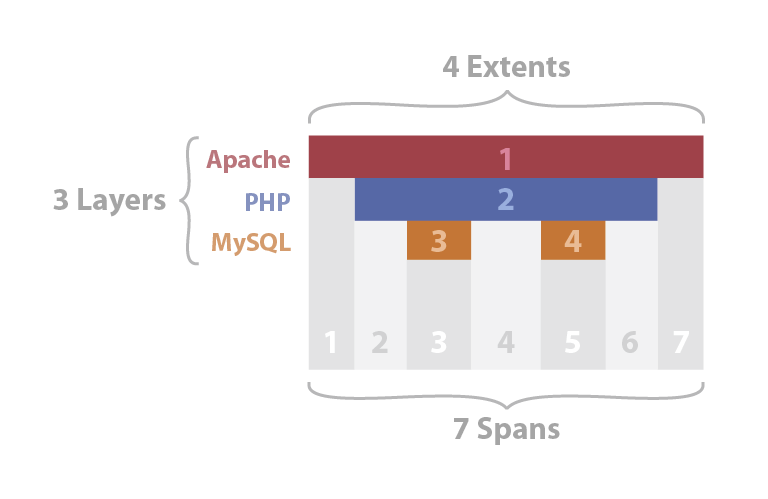 Unable to walk away from this fascinating challenge, I went rogue, burning midnight oil to create a green-field replacement. My prototype could smoothly animate, pan, scroll, and zoom through 20K+ extents at 60fps! This turned out to be the easy part. The hard parts came next: achieving full feature-parity, flushing out new features, adding unit & functional test coverage, and integrating with legacy endpoints & templates. 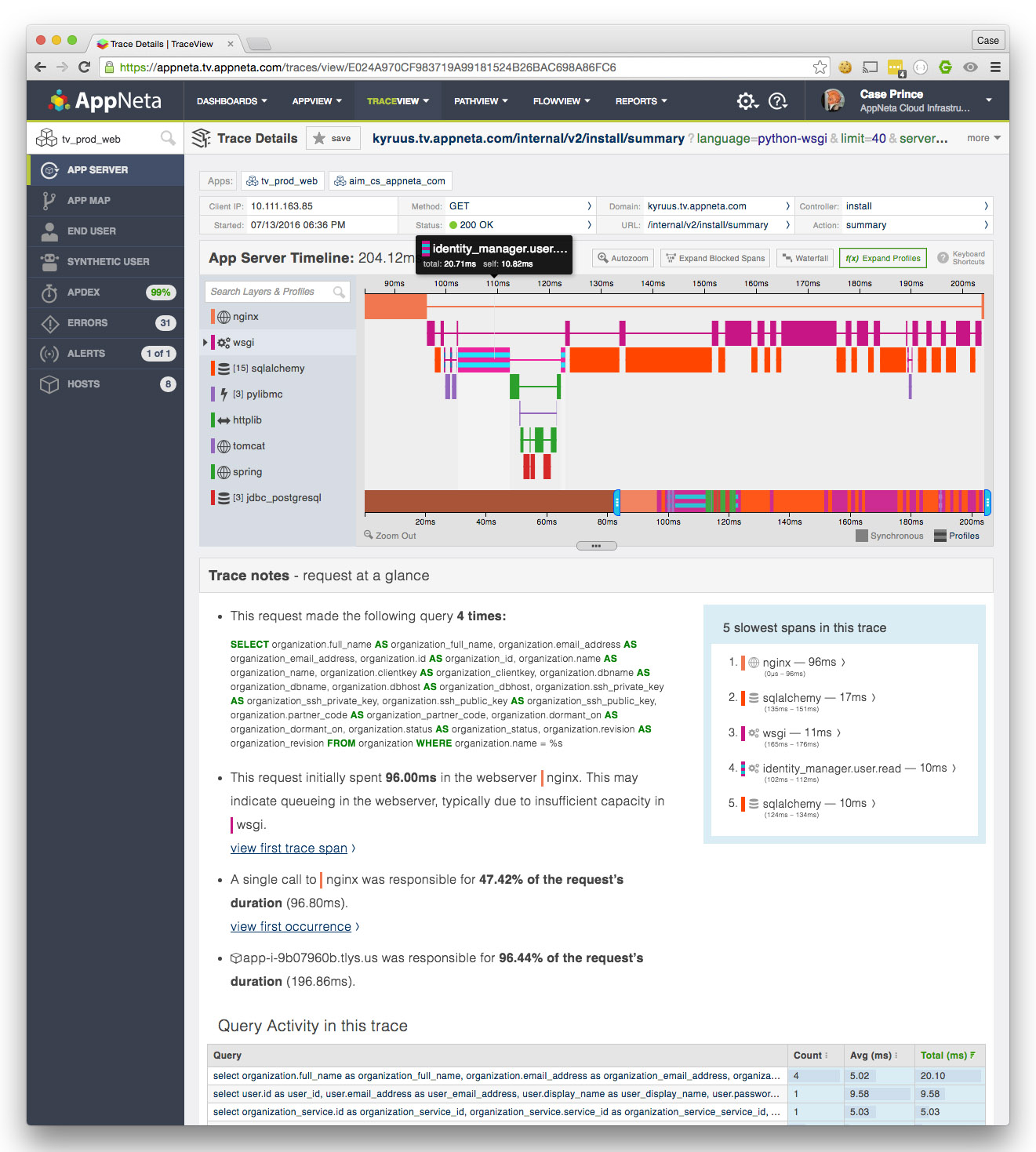 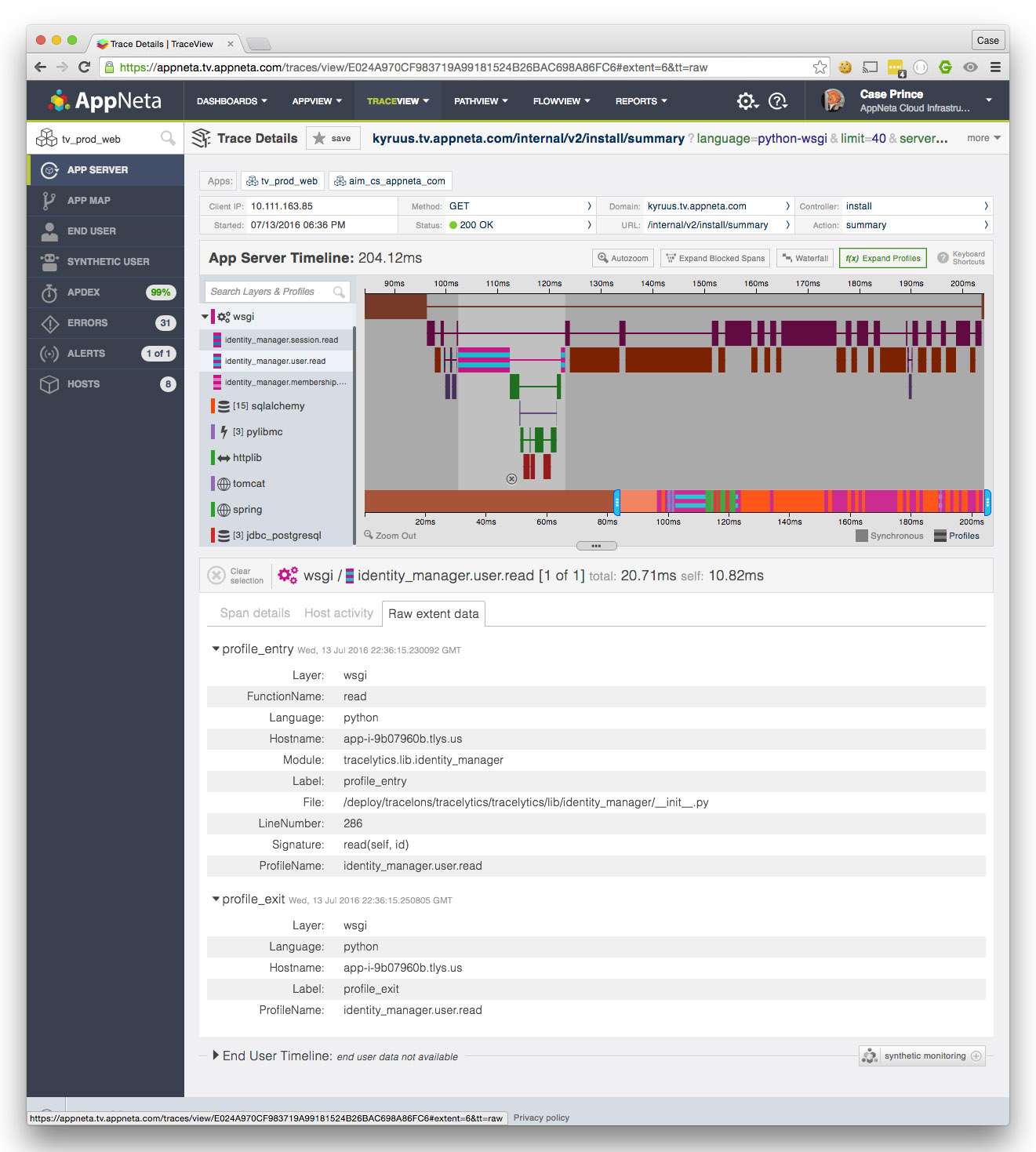 A tipping point when teammate Dan Riti organized a full-team hackathon. We all sat around the picnic table and I doled out subtasks to volunteers. Even our CTO Dan Kuebrich came down and hacked with us! Much fun was had and so much progress was made I was finally able to get buy-in from Product. 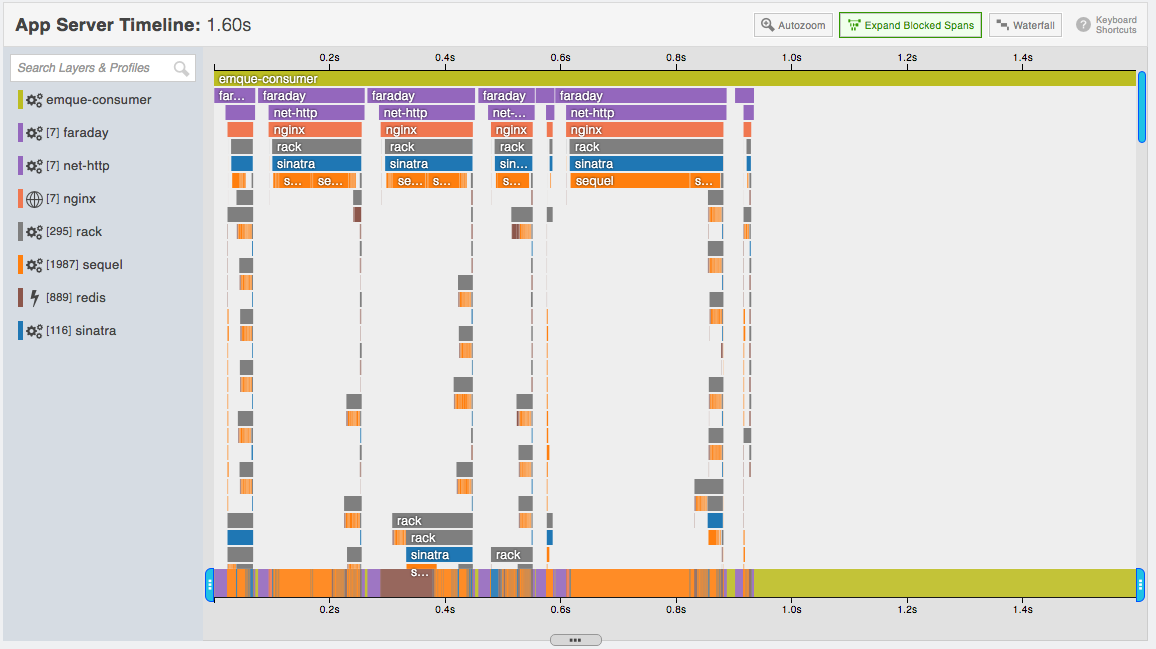 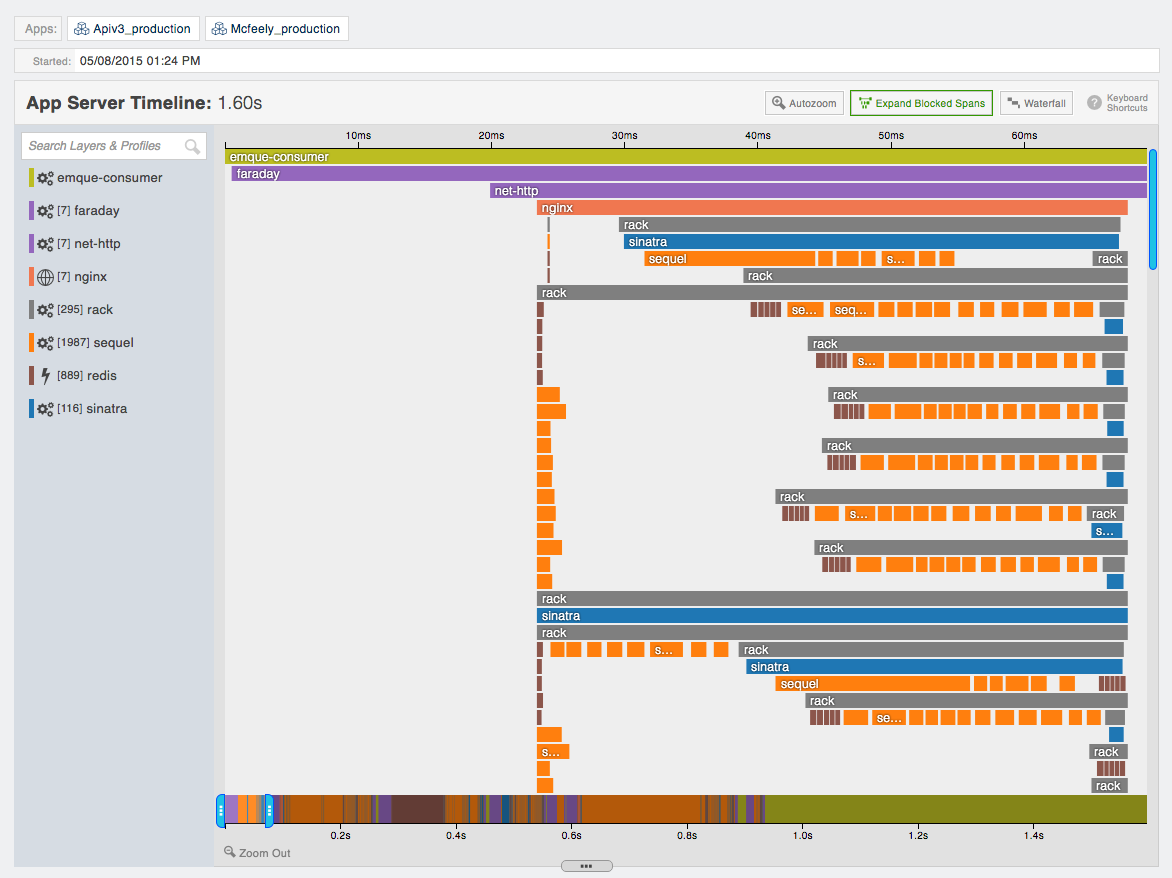 We worked with marketing, documentation, sales & support teams to prepare for launch, hosting demos for Product and Sales Engineers, writing a blog post and recording a video walkthrough. Since this was a critical visualizer, we preserved the legacy page in production behind a hidden URL as a fallback and for QA comparison.

The Vis That Keeps on Giving

Post-launch, we continued reaching out to users for feedback, and shipping UI/UX improvements. In addition to happier customers, we gained new insight into previously invisible edge-cases of malformed data in our trace-processing pipeline and instrumentation. TraceView is very much an "eat your own dogfood" product, and this upgraded vis created a ripple effect of improvements throughout our codebase.

A team-building, code-collaborating, conversation piece. I was jealous of AppNeta's sales reps ringing the big gong when they made a big sale, and wanted to learn a little Ruby, so I built this during our self-directed "20% Tuesdays."

This is the most important thing ever built with GitHub webhooks. http://t.co/qi0MsOMH45 👍

This shoestring contraption was surprisingly reliable for ~18 months - with only a little downtime when I tried to move the servo to a negative angle and the magic smoke got out, necessitating an upgrade: The new servos came in a 4-pack, so I gave Jenkins a coat-hanger driven musical-chime so he could let us know when our AMI Auto-Scaling Groups were ready. (Actually useful since our build process took ~30min.) I was working on Jira integration when the Git Gong was stymied by our IT dept. disabling 2.4GHz in favor of pure 5GHz wifi.

About A social-hub & blog for my wife's writing, marketing, social-media, and brand-strategy consultancy.

Site
caseprince.com/spheres/
About
This is most of my sphere collection. The interface is a learning exercise & experiment in JavaScript modularity, inheritance, 3d & particle rendering and physics. Needless to say it's a work in progress.
Source
github.com/caseprince/spheres
Tech
<canvas>, jQuery, require.js, three.js, Box2DWeb, tween.js, Simple JavaScript Inheritance.

A Rich Flash ad produced in 2008 for Coke Zero's Rooftop Racer 'advergame'. Grab the bottle and shake it up! Designed in collaboration with Crispin Porter + Bogusky

The Thrill of the Catch

About This was a "Dev Day" project and ended up being used as the main logo in our office, projected on a cool translucent wall at reception. My brilliant colegues made too many canvas animations to list them all, but some favorites are; Physics, PathTree, and Hairs.

I contributed some mathy animations, live weather reports & street-views for the office locations, and a traffic map for L.A. because their rush-hour is epic. Never quite got around to adding the surf-report/forecast.

Archive
Monster Configurator
Client
Mattel
Agency
RED
About
A Facebook App for configuring and sharing a Monster-High-style cartoon avatar of yourself. Users can configure face-shape, hair, facial features, makeup and accessories. Most assets can be scaled, positioned and/or tinted any color. Finished avatars are shared on users’ timelines and in a public gallery. 20K+ avatars were created in the first 2 weeks after launch.
Roles
UX design, Flash interface development, vector asset management & prep, and integration with Django backend.
Collaborator
Balind Sieber 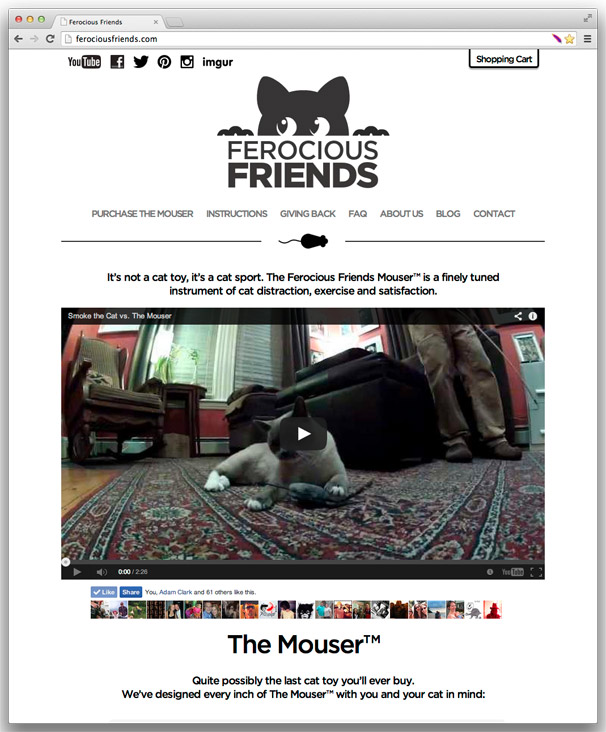 About high-quality cat toy brand brought to you by Emily & Case. We co-developed the toy and worked together on the branding and videography. I developed the website and branded all social channels, which are managed by Emily.

About
A piece for my little sister. Hundreds of red, green, blue and white LEDs, lots of copper wire and a mahogany base.

Super Mario in the 3rd Dimension 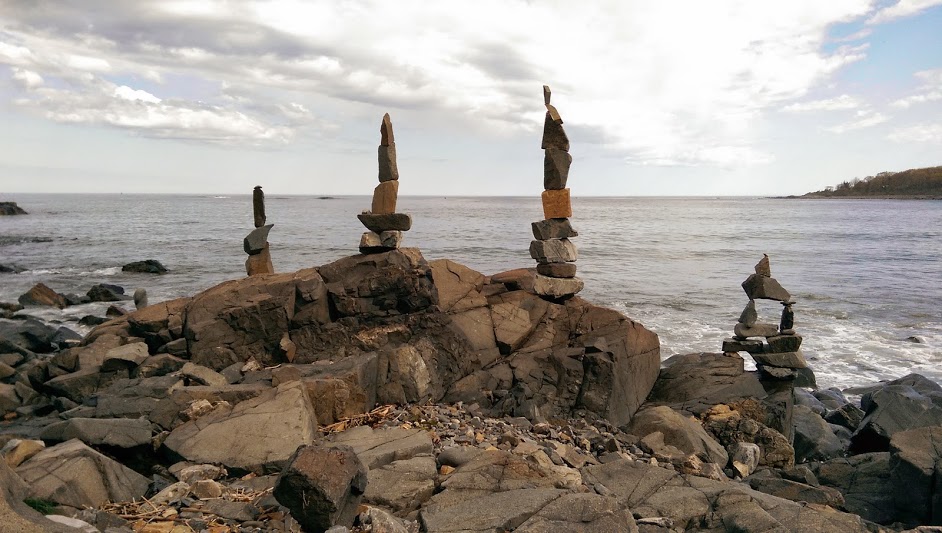 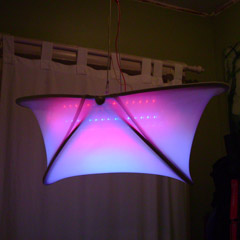